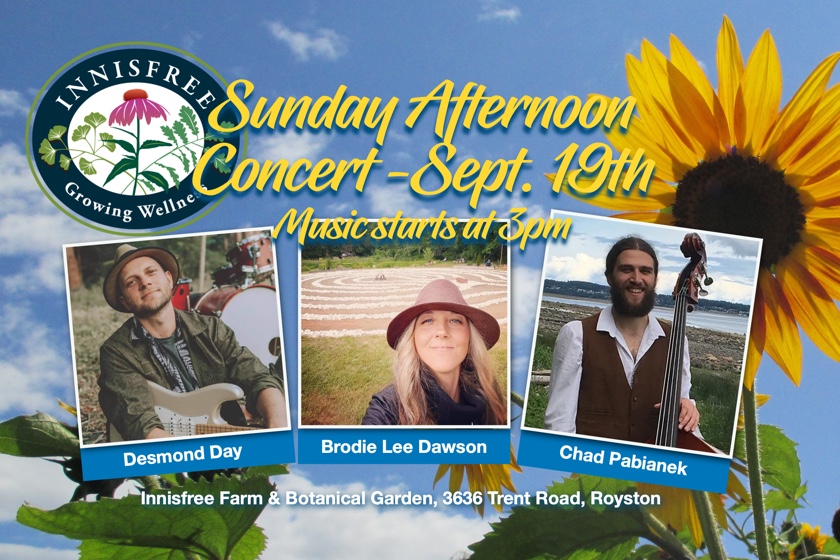 Join us for Sunday, September 19 for our final event of our summer concert series.

This one will be a little different – it’s all about the music and it all kicks off on the lawns of Innisfree at 3pm.

Brodie Lee Dawson, who has been our headliner throughout these summer concerts, is bringing along a couple fo new friends for this final show – Chad Pabianek and Des Larson.

Those of you who are hooked into the CV music scene, know Brodie Lee Dawson is an award-winning singer-songwriter with a long list of accolades and a voice that pulls you in and keeps you hooked. She has performed with some of the best and her 3rd album is due to be released this year. Check Brodie’s website for the latest news.

Chad Pabianek’s musical performances can vary from gig to gig. One night you might find him on an upright bass with a country band and the next, performing solo performer and playing originals, instrumentals, jazz standards and blue grass songs. Performing unaccompanied, as a backup musician or as a part of one of the many groups in the Comox Valley, Chad is a familiar face you’ve likely seen on stage. Check out Chad’s website to learn more about him and his music.

Des Larson, known professionally as Desmond Day, is a Canadian singer/songwriter who began his musical career right here in Comox Valley while attending high school. After graduating, Des moved to Vancouver to hone his skills as a live entertainer. Throughout his early career, Des continued to find support from his local community and after years of songwriting and balancing his earnings as a lounge singer in the local music scene, he began work on his debut album Space Between The Stars with music producer, Jeff Dawson. Learn more about Desmond Day on his website.

We did say it’s all about the music, so no preordering tickets and no food service.

Tickets are $25 and available through EventBrite.

Please bring your own chair; water bottles and a light snack are also allowed.

The concert will go ahead rain or shine, so gather up your friends and come and spend a little time with us and the musicians. It’s going to be fun afternoon!