One of the first conditions of happiness is that the link between Man and Nature shall not be broken.
– Leo Tolstoy (1828-1910) 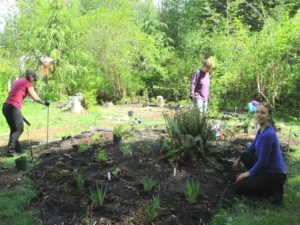 Our volunteers (L-R), Susi, Trudy and Holly, who designed the garden have been very busy getting the plants in.

British Columbia is Canada’s most biologically diverse province, with 70% of the nation’s vascular plants and moss species. About 2,500 species of plants are native to BC, with six being endemic (not found naturally occurring anywhere else). According to research from the University of British Columbia, there are 810 known native and naturalized vascular plants in the Comox Valley.

Innisfree Botanic Garden is located on the unceded territory of the K’ómoks First Nation on Vancouver Island, Canada. The area is known as a hotspot of native species. It is especially rich in biodiversity and traditional knowledge, and the new Native Medicinal Plant collection at Innisfree Botanic Garden will showcase that diversity and rich ecology.  The Native Medicinal Plant collection will be an in and ex-situ conservation site for native plants – specifically of those with edible and medicinal properties, those that are seen as sacred and those that are threatened in the province.

This garden is made possible by a generous grant from The Global Garden Fund operated by Botanic Gardens Conservation International of which Innisfree is a member. Specifically, funding for this project was provided by The Botanist Foundation, the charitable arm of The Botanist Gin Company. This gin features sustainably foraged and wild crafted herbs from the island of Islay in the Hebrides, where the best whiskey comes from and very close to where I grew up.

The  collection at Innisfree will function as a community resource of genetic materials, scientific knowledge and gardening skills. Our ultimate goal is for it to be centre of excellence for learning about nature, biophilia and conservation issues.

The long memory of traditional knowledge remains in the plants and seeds of this land, and they need protection. This plant collection comprises over 40 identified native medicinal plant species and promotes their sustainable cultivation and harvesting.

Priority is given to at-risk-plants and to plants known to have medicinal and/or food uses for indigenous peoples. All native species planted into the area are purchased from licensed traders who are reproducing them ex-situ and not harvesting living plants from the wild. 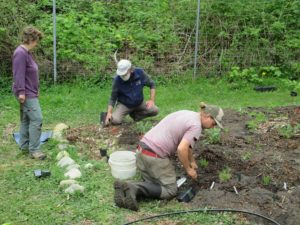 We are lucky to have such wonderful volunteers like (L-R) Trudy, Ron and Zach to help with the planting of the Native Garden at Innisfree.

Other useful links and resources are:
Native Plant Society of British Columbia
BC Native Plants

If you would like to learn more about which of Canada’s plant species are at risk, visit the Canadian Government’s Species at Risk Public Registry

For insight into a global strategy, visit
Convention on International Trade in Endangered Species of Wild Fauna and Flora (CITES)
Global Strategy for Plant Conservation  (GSPC) by the Convention on Biological Diversity

If you are looking to set up your own garden or nursery, visit:
How to Design a Plant Nursery at Home that Thrives by Cassandra Rosas